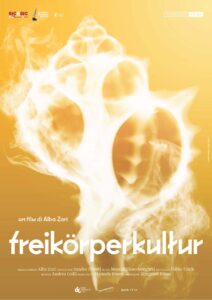 A family spends the summer months on the nudist beach. Intimacy and beauty of the naked bodies, the leaves draw geometrical shapes on the skin, the water seems relieving from any thought. Freikörperkultur is a poem about longing for what is lost and will never return.It’s the expulsion from Eden.

Alba Zari is a visual artist working with photography, video and sound. Since childhood she led a nomadic life that brought her to live in different cities and countries. She was born in Thailand and lived there until the age of eight. In Italy she lived ﬁrst in Trieste then in Bologna, where she graduated from the DAMS with a degree in ﬁlm. She went on to study documentary photography at the International center of photography in New York, and then continued her studies in photography and visual design at the NABA in Milan. Her experience as a traveler is reﬂected in her photographic practice, which intends to explore social themes, for example her visual studies of mental health centres since the Italian Basaglia Law and of the widespread eating disorders of the American society. Zari has an introspective sensibility for photography. Her recent works include Places (2015), a book and a photographic project which analyses the visual communication of ISIS propaganda; Radici (2013), a documentary project on the vegetation of the Mesr desert in Iran; The Y- Research of Biological Father (2016-), born out of a journey in search of her origins through the father she never knew. She often employs self-portraits.With The Y she is part of the Foam Talents 2020.  Her work has been exhibited in international festivals and museums such as MAXXI, Rome, London Art Fair, Circulation Paris and Athens Photo Festival; won  awards such as Backlight prize (Finland) and GraziaDei prize (Italy). Her work is held in private collections and musuems such as Fotomuseum Wintertur and Collezione Donata Pizzi. Alba is now working on an ongoing project called Occult, a visual study of the propaganda of the cult Children of God.

She was born in Bangkok in 1987 and now lives and works in London.